"You have my heartfelt thanks
for creating this wonderful sound!" May, 2004
Click here for the entire Jareeda review. 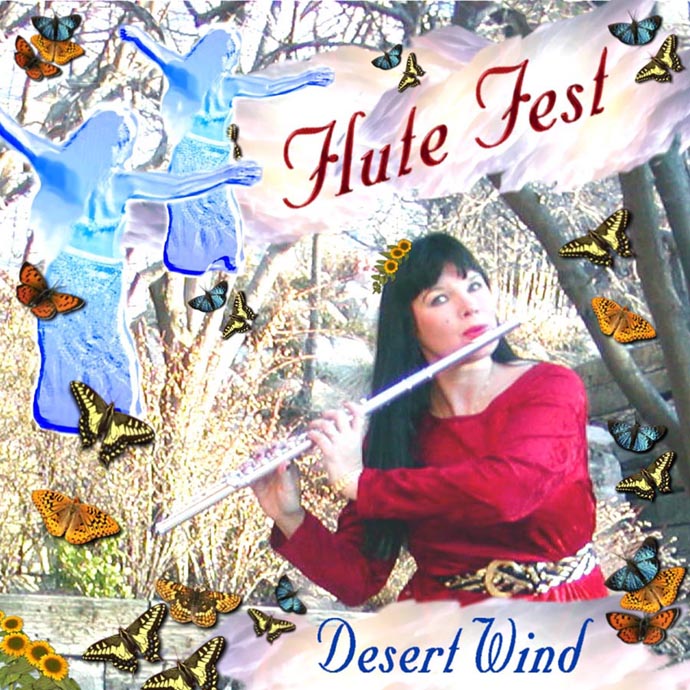 Alan Bachman and his crew at Desert Wind
shift gears with this album, toning down the
Middle Eastern exoticism of their usual
releases in favor of melodically-powerful
flute-based compositions. FLUTE FEST
is a showcase for Alan Bachman's intuitive
arrangements and Andalin Bachman's gorgeous
flute playing. The sound is contemporary, featuring
a backdrop of keyboard trancescapes, polyrhythmic
arrays of drum beats and percussive textures (Latin,
African and Asian rhythms all come into the mix),
piano playing and an assortment of different ethnic
instruments. The Bachmans touch upon such subgenres as jazz, bossa nova and even
classical music to create an intoxicating hybrid of east and west.

"Your CD is fantastic. From a jazz diehard as myself, I think that's saying something.
Wonderful spiritual flow.

Very enlightening. Now what I don't understand is how the both of you have full time
jobs and you have time and energy to do these projects as well. Keep the spirit up
as you both are."

Congratulations Desert Wind! You did it! In thirteen songs you ran the gambit of
all possible genres on one CD. Yet, somehow it has a coherent, magical flow.
Someday I hope I can play flute like that! ~Guess I'd need to find a band like that
also. :) Thank you for the uplifting and inspirational CD and website. I'm looking
forward to getting the other Desert Wind CDs now. 1 - 1 of 1 reviews

Beautiful, relaxing and upbeat all at the same time, this album is a first in combining
American Jazz Flute with Mediterranean style rhythms and scales. ~Great for dancing
and dreaming! (This CD was dedicated "to the dancers, dreamers and believers who
awakened this flute fantasy.")

Desert Wind takes flute music to a new level with this fun flute CD. Starting with the
thunder of "Parthenogenesis" and ending with a rock flute / guitar duo, this Flute CD
rocks! ~But wait! It's also jazzy and lyrical all at the same time. This is the kind of CD
you want to put on for a road trip!

Andalin's flute work is spectacular as she spontaneously weaves jazz and Middle
Eastern scales over funk bass in "Downtown Beladi". That song alone is worth this CD!

Then there is the surprising take on Beethoven's "Moonlight Sonata" where Desert
Wind added a flute part, drums and even tablas! Go figure. (!But then again, Desert
Wind is famous for tribal fusion, world-beat innovations in music.) No wonder the
dedication also includes a tribute to Miles Davis and Ludwig Van Beethoven in the
same breath!

Definitely a mixture of genres and influences, we are pleased to present this new
release by Desert Wind. The album offers more passionate world beat dance music
featuring Andalin's flute in a powerful and exotic blend of jazz, rock, world beat and
ever evolving Middle Eastern & Mediterranean tribal fusion. The flute is accompanied
by piano, keyboards, tabla, conga, bass, guitar and an impressive array of percussion
instruments.
~ Goldenrod Music, www.goldenrod.com

The first time I had the opportunity to listen to this CD was on a flight headed to California.
Because this was such an early morning flight there were very few people – so I had one
three seat section to myself. I really wanted to sleep since it was so quiet and I was so
exhausted from long days at work and long nights at the computer. But, in went the CD –
and to my delight, not only was I blessed with the music of the incomparable Andolin Bachman
and Desert Wind but a view ascending through the clouds to the site of the morning sun gave
a euphoric feeling that is somewhat difficult to describe. My body was saying “sleep”, but the
beauty of the music and the site unfolding before me had me glued to that window – listening
and watching.

The heavy cloud cover seemed to go with the beginning of the first piece of music
“Parthenogenesis” which begins with rain and thunder. We were rising through the clouds,
breaking through to orange and pink hues often only seen on a canvas. The music fit this
incredible break through to a level above the clouds, and just as we were topping out over
the cloud cover, the song ended with more rain. I began to wonder if Goddess had blessed
us that day with this site - specifically for the accompaniment of this CD. I know it sounds
a bit strange, but as I go on, you might begin to understand.

The next piece of music “Roses Bloom” had me nearly out of my seat. The gentleman
across the aisle must have noticed my struggle to keep my arms and hands down. They
were telling me to ignore the guy and dance. As well, my mind was rapidly trying to figure
out how I was going to incorporate this piece of music into the routine I was to do the next
day in Sacramento.

The next piece, “Downtown Beladi” reminds me of sitting in my favorite spot in Northwest
Portland on a busy Saturday afternoon in the summer – people watching. I can actually see
people in my mind, moving about, in time to this lively beladi rhythm. The flute adds the strut
of the crowd, while the rhythm, the excitement of the day.

By this point in the flight, we were high over the clouds and the orange globe of the sun was
coming up over the horizon. The scene before me and the music playing are so much like
the woman the song is named for “Andalin’s Song” – brilliant and powerful, yet delicate and
loving. The veil work running through my head is never ending. The sun did quite a miraculous
thing as the ending to this song began to unwind; the glow of the sun actually began to pulse,
it seemed in time to the last few beats of the song.

I was still getting over those last few beats, when the next song kicked in. I hadn’t yet
looked at the name of the song, and as I listened, still watching the glow of the sun which
hadn’t yet completely topped out from the horizon, I had the thought that the sun was fighting
for supremacy. The music seemed to go with that very thought. The Sun claiming its place
as King of the Universe. I looked down for a moment to catch the name of the song, and began
to laugh, “You’re the Bossa” was just so fitting. This piece of music will always remind me of
the Sun’s fight to get over that horizon – exciting and exhilarating.

Now, just as the sun topped, and the next piece of music began “Tribal Convergence” I was
watching the colors the sun had splayed over the clouds below. The pulsing rhythm and the
haunting flute made it seem as though there was a great gathering of dancers below, moving
and coming together, across the clouds in celebration of life. I could almost see them, their
arms uplifted, circling, dancing. What a joyful, fun piece of music this one is.

Personal note to Andalin: “You have outdone yourself – this is the most beautiful piece of music
I have ever heard”. I was thinking it somewhat ironic though, since the sun was fully blossomed.
Then, as I turned my head tentatively to look out the windows on the other side of the plane,
thankful that this time the gentleman there was leaning back, I caught a glimpse of the pale moon
on the opposite horizon. Now, I have to say that is just earie - - since the name of this piece is
Moonlight Sonata. Haunting, powerful, glorious, this is by far my favorite piece and I can see you
in my mind’s eye - - playing your flute.

Shake me out of this - - “Return of the Tribes” is the next piece. “They’re back” comes to mind first,
a fun, upbeat piece that again a little chuckle for the gentleman to the right.

“Veil Dancer” in typical Desert Wind format, the beginning is slow and deliberate, I can see the
dancer with her veil lingering in the air, just above her head, and she is dancing, just above the
now pink and purple cloud cover.

“Fly with Me” begins, just as a few bursts of turbulence hit the plane. Again, I am chuckling as I
look down and see the name of this piece of music. I am really beginning to wonder about this
experience now. As I look back out to those spectacular puffy pink and purple clouds below the
music causes the vision of those “oh so impish” fairies and sprites dancing about the clouds.
I could almost see those silly little creatures pointing at me and snickering – their antics causing
the turbulence we were feeling. This music seems to lend a mischievous “aire” (no pun intended)
. I will always feel fairies and fun in this piece, with veils flying and expressions playful.

“Bachman’s Bolero” – First the guitar riff, then the drum beat, then in joins the flute to this exciting
bolero. You can feel that Spanish essence, however this is not a fast piece, but rather somewhat
slow and very deliberate.

Now there is fog enveloping the sun casting a blue/white hue over the clouds. There is a shimmer
effect in the clouds. In the distance, you can see a blue strip between sun and clouds. “Flute Voyage”
begins. There is a driving feeling in the music as though we are heading toward that blue sky, out of
the clouds, away from the fog, a voyage resulting in happiness.

Last is “Disco Beladi”, an upbeat fun piece that begins as we begin our ascent. Foot tapping and
chair dancing is happening bringing another of those strange looks from the gentleman across the
aisle. There are horn shorts, keyboard sections, flute and drum. Fun Fun Fun! While I realize this
is probably one of the strangest reviews you have ever read, the experience for me was more than
I can express in words. I had picked up the CD several times – put it in the CD Player to listen to
in class and somehow managed to skip over it. There was something here - - something holding me
back, to bring it out on this very special day. It was meant to happen just this way, at just this time,
and for me, at that point it was more perfect than you know.

I would say this is a must have CD just for the overall “warm and fuzzy” emotional effect it gives.
To say the music is fabulous, incredible, wonderful? Well, that is an understatement. Is it danceable?
Absolutely, and you WILL see me use it. This one gets my very highest rating, and a must have for
any dancer’s tool kit. Yours in dance and friendship, Zaina Hart www.zainahart.com
www.zainahart.com 360-891-7041 P.O. Box 820186 Vancouver, WA 98682-0004